Check out this time-elapsed video of the Station Fire in LA, taken by Dan Finnerty. 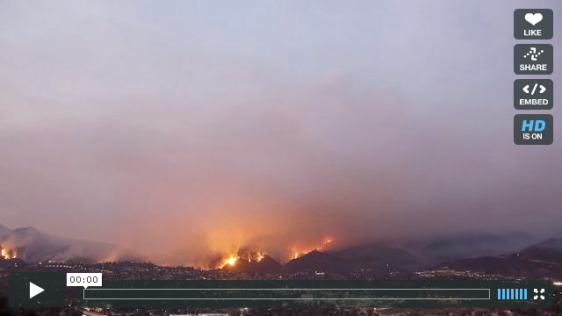 Our last blog post, Flaming Forests: Preventing the Next Inferno, discusses the use of prescribed burns in the prevention of large wildfires such as the Station Fire.

Climate Change Makes The Use of Controlled Burns and
Other Fuel Reduction Techniques More Imperative
by John J. Berger, Ph.D and Lani Maher

Fire has played an instrumental role in the evolution of many forest and grassland types, which continue to require its presence for ecological health and succession.1 Temperate and boreal forests, for example, naturally experience periodic wildfires in the absence of human fire-suppression efforts

For decades, however, the United States Forest Service’s “Smokey Bear” public education campaign convinced Americans that forest fire was an inherently destructive, unmitigated evil, as the service fought fires with bulldozers to plow firebreaks and aircraft to drop chemical fire retardants. Although successful in suppressing fires, the campaign also served to obscure the beneficial effects of forest and grassland fires from public awareness.

Effects of Fire Suppression
Where forest fires have long been suppressed, trees and brush grow thickly, drawing lots of moisture from the soil and sometimes drying up creeks and springs, reducing wildlife abundance and diversity. Some plants that require the heat of fire for germination may not reproduce at all, and others get crowded out by the dense brush and trees. In addition, so much fuel may accumulate that when fires eventually occur, they burn with enough ferocity to kill large, normally fire-resistant trees. They also bake the life out of the forest soil and cause both structural and chemical changes that produce a hard, water-resistant crust that impedes forest recovery.

The absence of trees following such a burn leaves the affected area vulnerable to erosion, landslides, and increased runoff, which in turn can clog and choke neighboring riparian ecosystems, harming their fish and other aquatic organisms.3

Dr. Little has conducted experiments to gauge the effects of fire-retardant chemicals including Fire-Trol® GTS-R and Phos-Chek® D75-R on fish and amphibian health and has found that exposure to these chemicals can cause illness and mortality in some fish and amphibian species.4 These sprays are often introduced to riparian systems through runoff, making them less effective and potentially harming nearby wildlife.5 These chemicals can also be introduced into riparian systems on ash from nearby fires. Furthermore, even when successful at delaying fire for long periods of time, delay often results in larger, more intense fires against which fire-retardant sprays are less effective.

The Station Fire
The Station Fire is a recent example of an inferno that followed a long period of fire suppression in California. It burned for 52 days before finally being fully contained October 16th, 2009 after burning over 250 square miles in the Angeles National Forest, making it the largest forest fire in Los Angeles County’s recorded history. Containment efforts cost taxpayers over $95 million. The blaze is part of a trend: scientists and researchers have noticed in the past decade that wildfires are becoming larger and more frequent. 7

“A recent New York Times article on the Station Fire notes that “7 of the state’s 10 largest wildfires have occurred in the last six years,”8 and discusses research by Scott L. Stephens and Dr. Little on the environmental issues that often arise after such devastating infernos. According to Dr. Stephens, a researcher at the University of California, Berkeley and president of the Association for Fire Ecology, investigations addressing the long-term environmental effects of the Station Fire coincided with recent studies on the effect climate change and drought may be having on forests and scrubland in high-burn areas.9 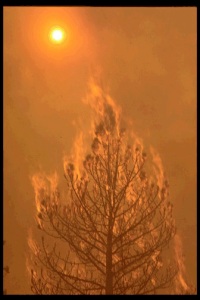 Wildfires and Climate Change
Climate change is suspected of increasing drought conditions and causing the fire season to start earlier and last longer in recent years. This means we can expect the number and intensity of fires to increase with time, and we need to devote more resources to conducting prescribed burns (and reducing fuel loads by other means) to try to prevent large, devastating, and uncontrollable fires, such as the Station Fire.

In reality, large wildfires are fundamentally uncontrollable forces of nature and, while they sometimes can be kept away from populated areas and certain high-value properties, true confinement and control depend upon natural conditions, including wind, rainfall, temperature, moisture, and fuel depletion. Controlled burn technology continues to improve as forest researchers and managers, such as Dr. Stephens, develop new techniques for performing prescribed burns and measuring their effectiveness at reducing fuel loads and preventing massive fires.

In recent years, even the Smokey Bear campaign has come to acknowledge the natural role that fire plays in forests and promotes prescribed fire as “one of the most effective tools . . . in preventing the outbreak and spread of wildfires,”10 so long as it’s conducted safely.

As forest managers recognize the benefits fire can bring to some ecosystems, and embrace prescribed burns as an effective forest management tool, popular sentiment on these issues is also changing, driven in part by worries of massive wildfires in populous areas and by the knowledge that worsening climate change is increasing wildfire frequency.